❝ In anarchistas we work around doubts, around the uncomfortable feeling of defining the border between right and wrong. How we deal with our fragile truths, with the truths of the others, how we define a common code, and how much we compromise in this action of building a language that is shared. When you can say you established a code and when this code is just a prelude for another question. But in the piece we also search the space for the simple desire and its primitive confidence: pure energy, pure movement, sure of itself and not conscious about aims and doubts and reflections, a sort of vigour that hunts for an “existential anarchism of the body. ❞

Anarchistas (2005) won the competition “satelliti” held by Sosta Palmizi network and the European network Junge Hunde project. The work received very good critics in the main newspapers of Amsterdam and The Netherlands. Anarchistas has been chosen, with four other pieces, for the DANSCLICK showcase, including a tour of 23 big theatres in The Netherlands, from October 2006 on. It has also been chosen by a Spanish dance network to be performed in a tour through the main city theatres (Madrid, Barcelona, Bilbao, Zaragoza) in a double bill with another representative of the most interesting choreographers of the new Dutch dance scene. 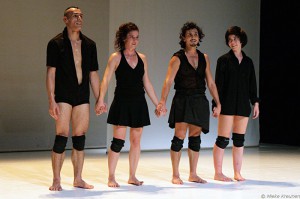